Featured
Home›Featured›Ending hunger in the UK: a national strategy?

Ending hunger in the UK: a national strategy?

In the Autumn 2019 issue of The Plain Truth, we looked at a joint initiative between Church Action on Poverty (CAP) and Action in Caerau & Ely (ACE) at the launch of their ‘Pantry’ at the Dusty Forge Community Shop in Cardiff. Since that time, we have been following the ongoing work of CAP as they continue to highlight the plight of the growing number of households in food poverty, and campaign to address its underlying causes.

Shortly after the General Election results were announced last month, we caught up with CAP’s Director, Niall Cooper, to find out what the plans and aims for the charity were over the next few years, and whether there would be support from the newly-formed government.

Plain Truth (PT): Tell us a little about Church Action on Poverty’s work on food poverty.
Church Action on Poverty (CAP): One of the defining elements of the decade we’ve just had was the sudden and very steep rise in food poverty. Hunger is not new in itself, but the scale and extent of it, and the way in which food aid became a routine part of society, was unprecedented in this country.

We and many other organisations were naturally concerned about this, so we’ve done a lot of work to understand and explain the root causes of UK hunger, and to challenge the systems that are causing problems.

End Hunger UK was set up in 2016 as a coalition campaign, to bring together lots of people and organisations who all wanted the same thing: a UK where everyone has access to good food and nobody needs to go to bed hungry. 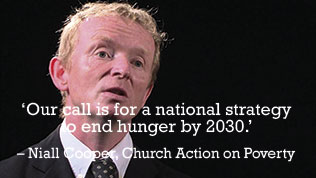 All over the country individuals, charities and community organisations were, and still are, doing amazing, compassionate work in their neighbourhoods to alleviate the consequences of poverty – but we will only end hunger by tackling the systemic causes. By sharing our insights and expertise, members of the campaign can have more impact, strengthening our voices and helping to bring about meaningful change that will make a real difference to people’s lives.

PT: You talk there about systemic causes and meaningful change. What specific things do you mean?
CAP: The UK is the sixth-richest nation in the world. We know that hunger here is not caused by any national lack of food – it is caused by the fact that millions of people’s incomes are insufficient, because the economy is not working the way that it should.

Many people who are working are in volatile and insecure jobs – they may be on zero-hours contracts, which means they don’t know from one week to the next what their income will be, or they may be in jobs where the pay has not kept pace with rising costs of living.

At the same time, the benefits system that is supposed to ensure people can stay afloat in difficult times is instead sweeping people into poverty. Benefit payments have been frozen for four years, meaning that many people who were just about keeping their head above water in 2015 or 2016 are now drowning in debt. And policies such as Universal Credit have been poorly designed and implemented, meaning they often hold back people who they are supposed to empower. The five-week wait for Universal Credit, for instance, means many new claimants are trapped in debt from the day they move on to the system.

PT:  Are these the sort of stories you’ve been hearing?
CAP: Yes, time and again. The End Hunger campaign began with a Big Conversation in 2016/17, when communities around the UK got together to talk about food poverty, its impact and what might be done. Then, and since then, we’ve heard from many people who feel trapped by the system.

We spoke to a school worker at Salford Food Bank. She suffered a bad injury in town, and wasn’t able to work, and was really let down by the benefits system. She had to wait weeks before any money came through, so she had to go to a food bank just to get by. If the payments had been made promptly, if the system had recognised the urgency of people’s situations, she would not have had to do that.

Also in Salford, we met a man who had never been in debt until Universal Credit was introduced, but while awaiting his first payment he was dragged into £810 of debt. He told us: ‘I am severely depressed. If they paid the money weekly or every two weeks, that would make a big difference.’

Then there was the man in Huddersfield. His first Universal Credit payment took 10 weeks to come through. There are very few people in the whole country who could manage on zero income for a long spell like that.

We spoke to a couple in York, Tony and Sue, who had been living above the pub where they worked. When their move to a new job fell through, they became homeless, and the design of Universal Credit held them down rather than enabling them to get back on their feet. In the end, they had to spend seven weeks living in a tent before their situation improved.

Nobody is comfortable with their neighbours going hungry. We all believe in compassion and access to good food – that’s why so many people donate to food aid projects. But they shouldn’t be needed, and we want to tackle the systems that create that need.

PT:  So what has the campaign achieved?
CAP: We have instigated some really important changes in national policy and practices. Thousands of people have got involved, contacting their MPs, signing petitions, getting involved in events. As a result, for the first time, the Government is funding some food specific support for low-income families during the school holidays, to ensure the loss of term-time meals does not hit families too severely. This pilot project in 2019 ought to pave the way for long-term provision. The Government will also this year begin monitoring household food insecurity, which is a crucial step towards solving it.

There’s still a long way to go though. We’ve been struck by the compassion and determination in communities across the country, but permanent and widespread change can only come about through Government leadership. In October last year, we called on all parties to ‘Act Now To End UK Hunger’. Almost 50 groups all over the country took part, unveiling the message at landmarks in their town or city, and we held a fantastic event at Sheffield Cathedral, including an amazing food bank choir. Our call is for a national strategy to end hunger by 2030. That has to be one of the first priorities of this new Government: to lay out a clear roadmap to ending hunger, that involves all departments and which is then a cornerstone of all Government policy for the next decade.

PT:  That 2030 milestone is significant, isn’t it, because in 2015 the UK pledged to end hunger by then?
CAP: Yes, that’s right. It is one of the UN Sustainable Development Goals that the UK signed. The political aspiration was there, and we believe it still is across all parties – but we can’t simply hope that we will get there. We need a clear, Government-led strategy tackling all the underlying causes of hunger, addressing issues such as the insecurity of so many jobs, the insufficiency and volatility of the benefits system, the lack of support for families in school holidays, the lack of localised crisis support and the disintegration of support for new parents.

PT:  Finally, how best can readers of this article get involved? How can people help those caught in food poverty and help to campaign for lasting change?
CAP: A simple first step would be to visit Church Action on Poverty’s own website, www.church-poverty.org.uk and complete the ‘stay in touch’ box on the home page. That way, we can send you campaign updates and messages and you can see how you can get involved. The movement to end hunger is growing, and we’ll be doing and promoting work all over the country in 2020.