LONG TO REIGN OVER US

Almost 60 million people in the UK today will only have lived during the reign of just one monarch – Her Majesty Queen Elizabeth II. (That’s a staggering 89% of the population.)

And this year, as she celebrates 70 years on the throne reigning over both the UK and Commonwealth, the UK will observe the Queen’s Platinum Jubilee with a 4-day Bank Holiday weekend from 2nd – 5th June.

To mark this global event, Christian charity HOPE Together have produced a book Our Faithful Queen: 70 Years of Faith & Service, written and produced by Catherine Butcher to support the work of churches. We caught up with Catherine, just as the first copies of the title were rolling off the press, to find out a little more of the background to its production as well as the aims for such an important title.

Plain Truth: Catherine, could you tell us how you came to prepare and edit such a significant publication?

Catherine Butcher: My interest in all things royal goes back a long way. And in fact when my children were quite small, and it was the Queen’s Golden Jubilee, we took them to Buckingham Palace where they slept outside on the pavement while waiting to watch the Royal Procession.

Also, around about that time I worked with local schools to help prepare assemblies and explain some of the symbolism of the Queen’s coronation. Previously I had gone along to the Tower of London and was struck by how many crosses there are on the crown jewels, which of course are central to how we mark monarchy in this country.

When you look at the coronation ceremony, you can see it’s a communion service. And although we see a lot of the ceremony broadcast and recorded, what we don’t see is the anointing. So by taking these ‘ceremonies’ into school assemblies – using a biscuit tin made into a crown and a velvet curtain to represent a cloak – we were able to re-enact aspects of the coronation.

Then for the Diamond Jubilee in 2012, by which time HOPE had been established, we worked with Biblica to produce a New Testament, and had around 750,000 copies printed. I wrote the introduction and drew out verses that connect with what happened during the coronation ceremony. Then when it came to the Queen’s 90th birthday, HOPE – in association with LICC and Bible Society – published the book The Servant Queen and the King she serves as we wanted to draw out the Queen’s faith.

I’ve kept a copy of every speech the Queen has made over the years. The Christmas messages are a great example of someone who gives a very easy testimony, as she points us to Jesus frequently.

Then when it came to the Platinum Jubilee, I went to Lambeth Palace Library and found a publication called A little book of private devotions in preparation for Her Majesty’s Coronation, presented to the Queen by the Archbishop of Canterbury, Geoffrey Fisher, to be used each day from 1st May to 2nd June 1953. It’s a devotional book of prayers, Bible readings and devotional thoughts that I’ve used as a basis for Our Faithful Queen, aiming to make it accessible to the wider public – the readers HOPE always aim to reach, the non-Christian. The hope is that churches will give away these books, pointing the un-churched to Jesus through conversations, because publications alone don’t lead people to Jesus – people lead people to Jesus.

So I have taken some of the text from that little book and also some of the Queen’s speeches, as well as looking through the events in her life – the joys and the difficulties – and the promises that she made at her coronation. Then we’ve put it together with lots of beautiful pictures. During this year there will be lots of souvenir books being produced, but what we’re doing at HOPE is unique in showing the importance of her Christian faith.

So, with my background of being an editor for various magazines in the past, that’s how I came to produce this delightful title for HOPE.

PT: The Sovereign holds the title ‘Defender of the Faith and Supreme Governor of the Church of England’. We understand the Queen’s relationship with the Church of England was symbolised at the coronation in 1953 when Her Majesty was anointed in a ‘hidden ceremony’ by the Archbishop of Canterbury and took an oath. Can you tell our readers a little more about this ceremony – and is this something highlighted in your book?

CB: The anointing ceremony took place under a canopy and was indeed hidden from the cameras. In fact, the late Queen Mother is quoted by her biographer William Shawcross, as saying that the anointing is the most significant part of the whole coronation ceremony. And that’s the part that people perhaps don’t really understand. I was so excited when I discovered that the Platinum Jubilee weekend would end on Pentecost Sunday. It’s a perfect opportunity to explain that anointing is something the Holy Spirit does – the Holy Spirit, given at Pentecost, to equip us and point us to God.

When the Queen was anointed, she removed her ceremonial robes and all her jewellery and was left wearing a simple white dress. In the book of devotionals it tells us that the Queen is coming to God as an ordinary woman to be anointed by God, because that’s what makes a difference; an ordinary life empowered by God’s Holy Spirit. In the little devotional the Archbishop explains how it’s the anointing that sets people aside for service, and a new relationship is established between God and his servants – something which is highlighted in Our Faithful Queen: 70 Years of Faith & Service. I’m hoping that this will help people understand – both Christians and non-Christians alike – the significance of this anointing.

The oaths and promises – the oaths to uphold the Gospel – are also covered in our publication and, as I said earlier, her Christmas broadcasts are often pointing out her faith and showing who Jesus is. Also in her speeches at the opening of each Synod, she challenges the Church, and in the book I quote some of those challenges too.

PT: How do you hope the book will be used by churches, groups and individuals?

CB: We’re hoping that churches will use our resources, which they can get through our website www.theplatinumjubilee.com. For example, there is a party planner and party games – pages and pages of them available to download free. Then there’s an anthem you can learn, Rise Up and Serve, and it’s not just for church choirs – community or school choirs can learn it too. It talks about how the Queen was blessed with prayer and sacred oil, so it does have that line in it referring back to this ‘hidden ceremony’. The anthem was written for us by Graham Kendrick, Mal Pope and Rend Collective, three of the great contemporary Christian song writers – the words, music and soundtrack can be downloaded from our website too.

Then, of course, there’s the book. We’re hoping that churches will organise a party; sing the anthem and get lots of local choirs to come, so parents and their children can come along – and our book can be given away as a souvenir. Then we have something for toddlers too, called The Girl Who Grew Up To Be Queen and that uses the Happyland characters from the Early Learning Centre. We’ve also got lots of resources for schools, uniformed organisations and youth groups including lesson plans which show seven different aspects of her life and values explained over seven sessions.

Then there’s the ‘70 Acts of Service’ which we hope churches will use to mark these 70 years of the Queen’s service, by serving others. For example, a simple ‘act of service’ could be sending a note of thanks to someone whose service usually goes unnoticed. Other ‘acts’ need a little more organisation, like setting up a shoeshine service in your local shopping centre.

So there are lots of ways that we hope will involve churches serving and getting their communities together. The culmination of this four-day celebration can be a great big Pentecost church service, with the whole community coming along and singing the anthem Rise Up and Serve together. Then finally, everyone can enjoy a Big Jubilee Lunch to celebrate the joyous event of the Queen’s Platinum Jubilee. 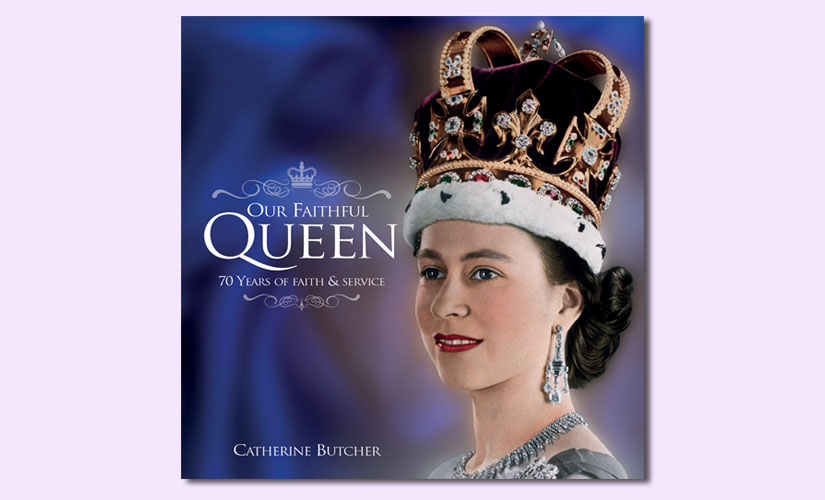 This 64-page gift book, full of photos, includes rarely-seen prayers from a book of devotions written for the Queen to use from 1 May to 2 June 1953 – her Coronation Day.

Published in partnership with Biblica, it is a unique gift to help readers appreciate the Queen’s Christian faith.

The prayers in A Little Book of Private Devotions were written by the former Archbishop of Canterbury, Geoffrey Fisher; there were only six copies of the book printed.

Our Faithful Queen: 70 Years of Faith & Service is an ideal conversation-starter to talk to friends and relatives about the Queen – her faith, prayer and the Bible.

It is HOPE Together’s aim that churches will buy them to give away to guests at Platinum Jubilee events.

You can order direct from: www.theplatinumjubilee.com

70th anniversary of the Queen’s accession.

Start of the four-day Bank Holiday weekend in the UK.

Lighting of beacons – around the country and Commonwealth.

The Derby at Epsom Downs, Surrey, attended by members of
the Royal Family.

Platinum Party at the Palace – a concert broadcast from
Buckingham Palace.

Pentecost Sunday services in churches around the country.

The Platinum Jubilee Pageant on The Mall – London. 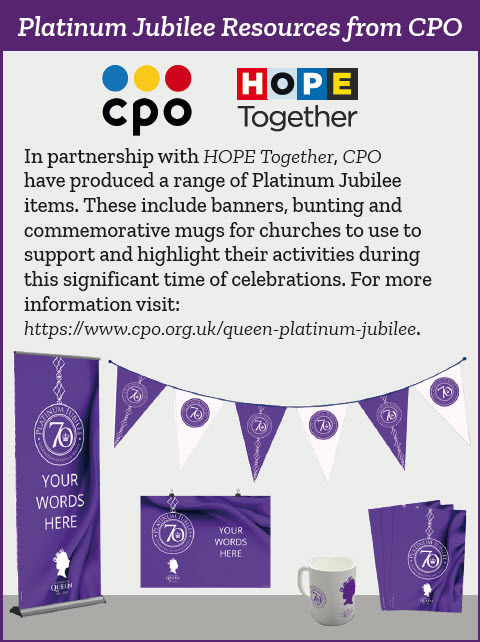