Featured
Home›Featured›COMING UP FOR AIR AFTER COVID-19

COMING UP FOR AIR AFTER COVID-19

I can’t tell you the number of TV and radio interviews I’ve heard over the past year that have begun with the following question: ‘So how worried should we be about…’ And it turns out that we should be very worried about more or less everything.

Listen to virtually any pundit on any given subject and you’ll be led to the conclusion that we’re going to hell in a handbasket. Preface any question with the likelihood of fear and this is what you’ll get. Every time. It’s getting worse, it’s going to be terrible, there’s nothing we can do about it.

So I’m going to attempt to write about a future that’s hopeful, where change occurs for the better and not the worse. Where there are more winners than losers. I believe that a Christian view of the world is infused with hope. The last time I checked, Joseph of Arimathea’s tomb remains empty and the bones of Jesus have not been found anywhere. He is not here, he is risen, is still the confession to which the Church adheres and thus I take the view that if death is not irreversible then neither is anything else. And by the way, this Christian hope is not centred on pies in the sky when you die but on the renewal of all things in the light of the resurrection.

Big ideas in the making

I used to be a Calvinist but now I’m an optimist and a lot happier for it too. I no longer accept that people, culture and world events are somehow predetermined by an unfeeling deity. That depravity and sin are more powerful than the vulnerable love of God in Christ. We are human beings, made in the image of God and so we go about our lives in the sure knowledge of original blessing and not original sin. This is just as well, because life after Covid is going to be busy. There’s much to repair and change if our world is going to be fairer and more just. And there are some big ideas being mooted out there.

One of the most exciting possibilities being mooted is a new Beveridge Report[i]. Eighty years ago, Liberal MP and economist, William Beveridge, was commissioned to produce a cross-party report on the economic reconstruction of Great Britain. He presented his report in 1942, as World War Two filled the skies, seas and land with weapons of mass destruction. Sporting the catchy title of ‘Social Insurance and Allied Services’, this report was revolutionary in its impact and fuelled the Labour Party’s landslide success in the 1945 General Election. 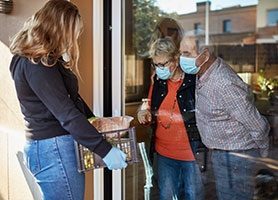 Beveridge’s report proposed that all people of working age should pay a national insurance contribution into a general fund that would benefit everyone. This would enable benefits to be paid to the sick, unemployed, retired or widowed.

It was the creation of a welfare system. In a phrase of poetic flourish, the report called on the government to find ways of fighting the ‘five giants’ of Want, Disease, Ignorance, Squalor and Idleness. Fundamental to Beveridge’s scheme was the need for a National Health Service, created by the Labour Party in 1948. At its launch, Health Minister, Aneurin Bevan said it had three core principles: ‘That it meets the needs of everyone; that it be free at the point of delivery; and that it be based on clinical need, not ability to pay.’

And there are many voices now calling for a big political vision to change the fortunes of the next generation. A new way of framing social policy so that everyone has access to the same opportunities regardless of class, gender, ethnicity or family wealth. It’s time for power and privilege to be taken away from the male, pale and stale minority and given to everyone else. In the jargon so beloved by politicians – it’s time to level up.

One of these voices is the Social Policy Association (SPA)[ii] but it wants to go bigger and broader than the original Beveridge Report. It’s arguing for a Royal Commission approach but going way beyond cross-party support. In the aftermath of the devastation left by Covid-19, the public needs to be deeply consulted, particularly minority groups whose voices are often drowned out. The SPA is calling for a comprehensive overhaul of the welfare system, one that provides for child care and social care, two huge areas that have been exposed during the pandemic. A recent blog concludes:

‘In every crisis there is an opportunity. This pandemic has brought immense suffering to many which will take a few more years to overcome. However, it also causes us to think about how we want to build back our society better to future proof against risks ahead of us and incorporate the diverse needs and demands of citizens. We should not go back to our old ways in haste but take a moment to reflect collectively how we want our welfare states to look like in future.’
– www.social-policy.org.uk/spa-blog/time-for-a-new-beveridge-report 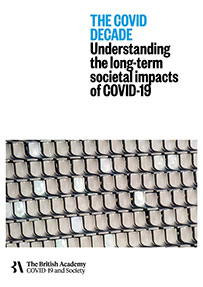 On an even bigger scale, after being asked by the Government Office for Science the British Academy has published its report (The COVID Decade: Understanding the long-term societal impacts of COVID-19). As is apparent in the title, it envisages Covid’s impact as long term and lasting. The report highlights nine areas of societal impact and not all are negative.

For example, it argues that this year of pandemic has highlighted the role played by voluntary organisations and community groups in a variety of essential and positive ways. Charities need to be strengthened, particularly since they are to be found everywhere and are trusted by their communities. This year of crisis has also exposed the importance of mental health and wellbeing, areas again in need of development and funding. But the report also reasons that many aspects of public life have been negatively exposed by Covid-19.

These include health inequalities that have allowed Covid to disproportionately impact people whose income is low or who are part of the BAME communities. We have also witnessed the vulnerability of the social care sector, not part of the welfare system and apparently left to fend for itself. These, and other areas of concern, were already present but cruelly shown up in this year of crisis. Nevertheless, it’s not all doom and gloom:

History indicates that times of upheaval – such as the pandemic – can be opportunities to reshape society, but that this requires vision and for key decision-makers to work together in concert.
–www.thebritishacademy.ac.uk/publications/covid-decade-understanding-the-long-term-societal-impacts-of-covid-19

When businesses have failed this year, pundits have often commented that the fault lines were present before the pandemic but have opened dramatically and fatally during this year. In other words, they were already in trouble and Covid brought things to an inevitable head. This seems to be especially true of businesses that have struggled with combining their in-person and online presence.

Which brings us of course to the Church. It seems to me that what is true of business is also evident in church life. The online world is here to stay, and we’ll need to adapt to life both on a screen and in a shared physical space. If we don’t, we could face the same destiny as Debenhams or Sir Philip Green’s Arcadia Group. In the end it‘s about understanding the needs of our faith communities (and beyond), communicating the relevance of God’s goodness in a thousand different ways. But more of this at a later date.

Why shouldn’t the future be bright for everyone?

[i] The Beveridge Report was published in November 1942.

[ii] The Social Policy Association (SPA) is the UK’s professional association for teachers, researchers, students and practitioners of social policy.