THE CALL TO REBUILD SYRIA’S RUINS

Stay-at-home mum, Samara Levy’s fledgling desire to help war-weary Syrians propelled her on a life-changing journey amid danger and poverty. Founding a charity has opened the floodgates of provision for hundreds of thousands of people and as an author, she tells of the heartaches and miracles that have accompanied her astonishing mission.

It is believed more than 13.4 million in Syria require humanitarian help; the UN has described it as ‘the worst humanitarian crisis of our time.’ But Samara explains how a small gesture of love and a mustard seed of faith became the catalyst for a £2.6m campaign that began eight years ago.

The charity, Samara’s Aid Appeal, helps those internally displaced, bereaved, traumatised, impoverished and homeless. Samara raises a motivational voice broadcasting their life-threatening plight: many have been forced to flee their homes to escape violence, terrorism, persecution and war while lack of essentials means they struggle to survive.

Together with her volunteer team, Samara makes numerous pleas for support. These have resulted in sending 110 containers and lorries to the Middle East including providing 11 ambulances to Syria and funding for numerous growing initiatives including medical care and services for orphans and widows. Last year they opened a centre which feeds, educates and provides a safe place for orphans and gives livelihood training to widows. It has been so successful they have built a second that is soon ready to open.

Living with relative comfort, ease and luxury in comparison Samara has been moved to radically love her neighbour as Jesus commands: ‘His words are very simple, and are black and white, asking us to share what we have and to feed the hungry, clothe the naked and care for the sick,’ says Samara who has sacrificed social life and material pursuits to pour time and energy into her calling. The former A&E nurse who gave up her full-on job to care for her two small boys says: ‘Two thirds of the hospitals in Syria have been destroyed, damaged or are largely dysfunctional but our charity aims at rebuilding hope and demonstrating God’s love and light.’

She continues: ‘We established four temporary field hospitals at different times in the conflict, one of which treated 3,000 patients a month. Another permanent medical centre with specialist services is due to open soon while we also work to our future goal for a large hospital with even more advanced facilities.’

The overall need in Syria is dire and costly. Samara has witnessed the shocking large-scale devastation and horrific atrocities done to humanity during numerous visits. But as well as responding to raising funds for medical projects, the charity is engaged with farming projects and support and provision for orphans, disadvantaged children, and widows, empowering and equipping them to reach their potential in life. ‘Too many poorer widows, bereaved by the Syrian war, have been forced to sell their bodies to survive and feed their children,’ she explains. As the country copes with the fall-out from the Pandemic people’s income and livelihoods have been hit hard as food prices continue to rocket but charity teams are helping to provide meals for the orphans, widows and the poor.

Samara’s heart burnt with compassion when she saw the graphic newsreels and reports of a rejected people on the margins of society who had fled from ISIS. They lived under canvas amid freezing temperatures and gun fire and many children wore flip flops in the snow.

‘I was heartbroken, thinking of my own children and how traumatic it would feel not being able to keep them warm.’ She continued: ‘In August 2014 I was watching the crisis in northern Iraq unfolding with millions losing their homes. I was deeply shocked to see a photo of a baby that had been beheaded by ISIS.’

Tearful, sleepless, and aching, Samara got down on her knees to pray, asking how she could help.
‘I wondered what I could do as a stay-at-home mum with young children, with little to give, but I mounted a collection, in obedience to God’s instructions, by asking mums in my son’s class for clothes, blankets and shoes.’
‘We can do nothing by ourselves,’ says Samara who recalls stretching her faith to fill one of the largest lorries available. Realising the response was insufficient she says: ‘I begged God’s mercy to meet the gaping shortfall, to fill the vehicle’s 90 cubic metre capacity that would cost £6,500 to transport to our first destination in Iraq.’

Within a fortnight the community responded with church support and a school minibus arrived with stacks of boxes. ‘I had asked God: if he could feed the 5,000 would he also multiply the giving. The result was so generous that my “nets” were breaking!’ Those small beginnings rallied the nation as more collections flooded in and 109 more lorries and containers have been sent overseas as the explosive mission developed. By 2018, barely four years after that initial despatch, more than 500,000 people in the Middle East had been recipients of the love parcels from the people of the UK.

God’s strong arm of delivery continues for the challenges, dangers, and lessons that unfold. But responsibility as founder and overseer of the charity is daunting. Samara explained that four years ago, ISIS attacked and took control of the area where their first field hospital was situated and where their frontline team on the ground were working. It was a desperate situation, and their lives were in peril as, with ISIS, execution and imprisonment are all too prevalent, but fasting and prayer to seek God for his wisdom secured their safe immediate exit just before the area fell to full ISIS control.

‘I have learnt that Syria is one of the most complex and dangerous countries in the world with the highest number of kidnappings, and killings of aid workers and attacks on health care. There are also fuel, electricity and supply shortages and many things must be imported so there are continual challenges to see projects completed. At the moment, even importing is challenging. Syria is in crisis and 90% of children need humanitarian help, with more than half a million suffering stunting and permanent physical and cognitive changes resulting from chronic malnutrition.

‘The team and I have had to depend on the Lord to clearly see his regular breakthroughs, but it is important to be immersed in prayer. I am overwhelmed at what God has done. He has given me a heart for the people of Syria; I know he loves them so much. I hope we can continue to show them his love, through practical means, for many years to come.’ 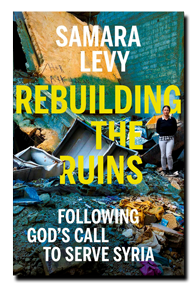 Rebuilding the Ruins tells Samara’s story. Aa a mother of two young children, in 2014 she embarked on an incredible journey, after seeing reports of barefoot children living in snow-covered refugee camps. She began asking the mothers at school for winter clothes, and it quickly grew into a nationwide appeal taken on by hundreds of churches, schools and community groups across the UK.

It grew into a charity which has provided a handful of field hospitals and medical facilities in Syria during the conflict, has established an outreach centre for orphans and widows, is undertaking farming projects and has a goal of building a new hospital to serve the Syrian people.

It is a story of hope, faith, and of love which crosses borders to reach out to some of the world’s most vulnerable people. It describes countless, incredible answers to prayer, in response to stepping out in faith to serve others.

All royalties and proceeds from book sales go back into supporting Samara’s ministry to the poor, vulnerable, broken and spiritually hungry in Syria.

Up from the Ashes: A Syrian Christian Doctor’s Story of Sacrifice,
Endurance and Hope 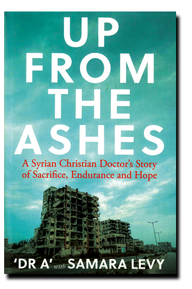 Up From The Ashes tells the story of a penniless Syrian boy with dream. His poor family background didn’t deter him from aspiring to become a doctor, but rather spurred him on to study hard. He excelled in every subject at school, achieving his ambition of first gaining a scholarship for a free place at medical school, then of becoming a successful doctor in Syria.

He specialised in intensive care, emergency care and cardiac surgery, and established partnerships in numerous hospitals, later going on to also become a consultant and trainer in disaster management.

His strong work ethic and service in these specialisms placed him in the thick of the Syrian war, where he saw and experienced the worst of the conflict since the start.

Yet despite the atrocities he has encountered, many first hand, his Christian faith has been strengthened through the life-changing circumstances that destroyed his hospital, his community, and so many lives around him.

In the midst of the chaos and destruction he reached out day by day, year after year, to serve and encourage his people. He continues to pursue his mission to serve and revive his community through establishing an infrastructure which serves the genuine needs of the Syrian people.

His story is one of betrayal, loss and forgiveness, yet also of hope, resilience, love and integrity. It is a challenging and humbling, yet deeply inspiring page-turner, and will be a true, life-changing gift to all who read it.

Both books are published by Hodder and Stoughton and are available from major book retailers and also on Samara’s website: https://www.samarasaidappeal.org/books