Featured
Home›Featured›LET MY VOICE BE HEARD

LET MY VOICE BE HEARD

I have known Michael since 2002. He was then a beautiful and bonny boy of seven years. Along with his parents, Nick and Sue, this little family were regular and much-loved members of our church. Even then, at a tender age, Michael would fill his lungs and bellow a loud amen during worship. Now in his twenties, Michael’s responses are even livelier, and more heartfelt than before, expressing his love for God and his church. I have witnessed, time after time, the devotion of his parents and the bond of love so tightly woven around them.

I think of this family in the light of current developments surrounding the law of abortion, prompted by moves to align practice in Northern Ireland with the rest of the UK. Until very recently, abortion has been deemed a criminal offence in Northern Ireland. And that legislation still stands. Under the Offences Against the Person Act 1861 it is a criminal offence for a woman or girl to have an unlawful abortion or for any other person to carry out an unlawful abortion. And Section 25(1) of the Criminal Justice Act (Northern Ireland) 1945 makes it a criminal offence for anyone to assist or wilfully act to ‘destroy the life of a child then capable of being born alive’, except where the purpose is to preserve the life of the mother ‘in good faith’.

Since 2017 the UK Government has offered access to abortion services in England and Wales for women and girls resident in Northern Ireland, on the same basis as services which are offered to women and girls resident in England and Wales. As part of a consultation process to change abortion law in Northern Ireland, disability rights campaigners have directed a vast beam of light at current murky practices. And they are calling on the government to take the opportunity to protect the most vulnerable in society.

Under a consultation document, abortion will be available in the following circumstances:

It’s the last recommendation that is raising the ire of campaigners like Heidi Crowter. Heidi is a 24-year-old woman from Coventry with Down’s syndrome, and she is bringing a landmark case against the Government, together with Cheryl Bilsborrow from Preston, whose two-year-old son Hector also has Down’s syndrome. They are accusing the government of discriminating against people with Down’s Syndrome – at present, abortions are permitted right up to birth where tests indicate that the foetus has this condition. They argue that there were 3,269 disability-selective abortions in 2018 and 618 of these were for Down’s syndrome. This represents a 42% increase in abortions for Down’s syndrome in the last ten years.

Explaining why they are taking the government to court, Heidi said: ‘At the moment in the UK, babies can be aborted right up to birth if they are considered to be “seriously handicapped”. They include me in that definition of being seriously handicapped – just because I have an extra chromosome! Can you believe that?

‘What it says to me is that my life just isn’t as valuable as others, and I don’t think that’s right. I think it’s downright discrimination! The United Nations Committee on the Rights of Persons with Disabilities recently said that the United Kingdom should change its abortion law to make sure that people like me aren’t singled out because of our disabilities. Sadly, the Government decided to ignore their recommendations and didn’t change the law. So now, I am going to take the Government to court with other members of the Down’s syndrome community to make sure that people aren’t treated differently because of their disabilities.’

A number of organisations are supporting this legal action, including ‘Don’t Screen Us Out’. They have written to the Prime Minister seeking an urgent meeting to discuss concerns with the proposals. This letter has been signed by over 2,000 people with Down’s syndrome and their families, many of whom sent photos of themselves and their loved ones. Don’t Screen Us Out have long argued that current abortion laws disproportionately target people with disabilities and that the government can choose to change this approach in this new legislation.

Lynn Murray, spokesperson for Don’t Screen Us Out, said:

‘By stating that disability is grounds for termination, section 1(1)(d) of the Abortion Act, promotes inequality. It would be totally condemned if a country’s abortion laws singled out babies on the ground of gender or skin colour, but because it’s a disability such as Down’s syndrome, that’s somehow ok? This is inequality, sanctioned, sponsored and funded by the state.

‘This provision in the Abortion Act is a hangover from a time when we had totally different attitudes to the inclusion and contribution of people with disabilities. You only have to look at the discriminatory language used by all sides of the debate in Parliament when this was discussed in 1967 and 1990 to realise how far attitudes have changed. Society has moved on, but the law hasn’t. It’s time it did.

‘We live in a society which proclaims that we want to empower those with disabilities, and that regardless of your background, you deserve a fair and equal chance at life. We believe that our laws must reflect this narrative.’ 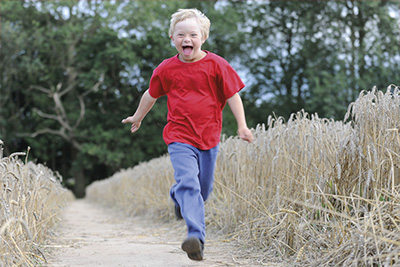 And this is why I am reminded of Michael and his parents. He has Down’s syndrome and is dependent on his parents and carers for everyday living. But talk to his parents and you’ll hear a story of love as well as struggle. Sue mentions occasions when Michael’s trust in God has rubbed off on her and others. This ranges from the daily reciting of the Lord’s Prayer to praying in public for people in supermarkets. She feels that God speaks to her through her son’s simple faith and this has radically changed her perspective. Nick describes Michael as being part of God’s rainbow, a dazzling spectrum of diversity.

Michael was baptised last year, and I had the pleasure of sharing in this extraordinary event. A young woman with Down’s syndrome sang He’s got the whole world in his hands while Michael and Sue told a Bible story. Michael sang his favourite hymn, How great Thou Art, ending with a deafening Amen, Hallelujah! And then came the baptism. As he emerged from the water, Michael erupted in the loudest Amen, Hallelujah I’d ever heard. The congregation spontaneously broke into cheers and applause.

As Heidi Crowter and others battle with the Government, I can’t help thinking about Michael. He too deserves the right to live and society needs to accept Michael (and others with Down’s syndrome) as part of God’s rainbow. It’s a complex issue with no easy answers but it’s worth noting that the argument pursued by the complainants is not essentially theological or ethical. It’s about justice.

In a society that prizes diversity and inclusion, this particular community believes it is being discriminated against. Their voice needs to be heard.

Don’t Screen Us Out is at https://dontscreenusout.org