Astrid’s article from the Autumn 2019 issue of The Plain Truth reminds us of the important role bees and other pollinators play in the ecosystem.

A closer look at our pollinator friends

Over the summer, I was one of the many thousands that took part in the insect surveys being conducted across the country. Partly as background for this article, but also to contribute to the scientists’ research into our natural environment. The gathered data from these ‘counts’ is extremely important for the scientists who are able to collate this information and document what is going on in our environment.[1]) 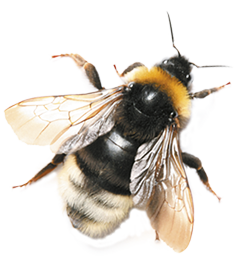 So far, a whopping million insect species have been identified worldwide. But there could be as many as 5-10 million of them in total. And insects are thought to make up around 75% of all animal species.[2] Apart from being a food source for other animals, insects carry out a number of vital tasks in our environment such as breaking down organic matter, and carrying nutrients like nitrogen and carbon in their respective cycles.[3] But one of the most important things they do is to pollinate our plants and crops.

Most plants reproduce by means of pollination. Pollen is transferred from the male part of the flower, to the female part of the flower in order to set seed. Grain crops such as wheat, rice and barley are wind-pollinated – interestingly these have no sweet scent or nectar to attract pollinators.[4] But, over 80% of EU crops rely on insect pollination, including many types of fruit and vegetables, such as apples, cherries, blueberries, carrots and pumpkins. Also, more than 80% of the wildflowers in Europe need insect pollination, too.[1])

In the first few pages of the Bible[5], we can read the order of events in the well-known ‘creation story’. Have you ever noticed that the insects were created a couple of days after the plants? And, as a large percentage of plants rely on insect pollination in order to reproduce, we can be sure the insects didn’t waste any time.

But this year, we have been told about a worldwide decline of insects – including bees – estimated to be over 40%. This alarming news, endorsed by the UN[6], has been reached following reviews of more than 70 studies and reports, from all over the world, covering the decline of different species.[3] It would appear that climate change is partly to blame – but there are also some more down-to-earth reasons. Let’s take a look at what’s happening to our bee population.

Bees are among the most common groups of insects, and scientists have identified approximately 20,000 species worldwide. In the UK there are over 250 species. 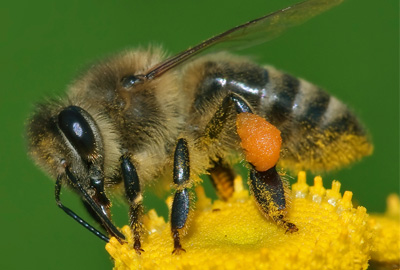 And without them, it would cost UK farmers an extra £1.8 billion every year to employ people to do the same work. Bees are great pollinators, especially female bumblebees and honey bees. These don’t just dine on the nectar, but they also collect pollen for their larvae and nests in ‘pollen baskets’, which they have on their hind legs. Because of their furry legs and bodies they easily pick up and dust off pollen in the process, making them very effective for this task. The honey bees also make delicious honey from the nectar they collect. And while bees are rarely mentioned in the Bible, the word ‘honey’ does appear in over 50 verses. (Perhaps as a point of interest, nearly half of those speak of the Promised Land.[8])

But now, 35 bee species in the UK are in decline. Some of the main reasons for this decline include changes in land use, loss of habitat and flowers, and the use of pesticides – in all of which mankind has played a leading role.

Since WW2 we have cleared away a staggering 97% of wildlife meadows in the UK. Just think of all those flowers filled with pollen and nectar, which used to feed bees and other insects, not to forget the glorious array of colour they added to our landscapes. The situation has become so bad, that bees are now more or less dependent on protected wildlife sites. Land has been cleared for increased monoculture – blankets of just one crop covering vast areas. Also, a lot of land has been sold for urban development with little thought of the loss of wildlife habitats.

In the UK there are over 250 species.And without them, it would cost UK farmers an extra £1.8 billion every year to employ people to do the same work.

A third of the world’s crops is lost to insects and plant diseases every year and [9] the controls used to manage this fall within three main areas:

The two conflicting interests of cheap food and conservation are at loggerheads. The former results in degraded soils, often due to intensive farming and deforestation. And as crops are increasingly grown in monoculture, pests and diseases can spread much quicker – especially if the habitats for the natural predators of the pest or disease have been cleared away. Pesticides are often used as a ‘quick fix’ solution. Unfortunately, over time the pests develop resistance and new pesticides have to be developed, making this option very expensive in the long run [10]. 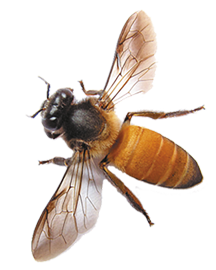 Tragically the pesticides we use are harmful to more than the pests for which they are designed to eliminate. For this reason the EU banned certain pesticides last year, containing the chemicals neonicotinoids and fipronil because of the harm they cause to bees. However, in Brazil restrictions on pesticides were lifted, and over the summer a shocking 500 million bees died in just three months as a result. [11]

What can be done?

Friends of the Earth is a charity that is confident that restoring traditional hay and flower meadows, water meadows, ponds and hedgerow trees would boost pollination. This would also provide habitats for the natural predators, which would eat the pests.

For those of us in more urban areas, a little food and board can go a long way. Plain Truth readers may recall having seen the well-known ‘Bee Saver Kit’, inserted in the magazine from time to time, providing information on food, water and shelter for bees. Growing a few plants rich in nectar and pollen in window boxes, or in the garden will attract bees: lavender, honeysuckle, crocus, snowdrops, rosemary and chives, strawberries and runner beans are just some of the plants that can be grown. [12] Bees can drink from bird baths or small bowls of water on the window sill, and you can even make a bee hotel out of hollow bamboo.[13]

Surely, bees were designed and created to help us tend and keep this planet, and they do it for free, without much of a fuss. Let’s not take them for granted. Instead, let’s do what we can to take care of our small, furry co-workers.