Featured
Home›Featured›JUST POPPING INTO THE PANTRY

JUST POPPING INTO THE PANTRY

Hunger has become normal in the UK. A nation that is part of the most exclusive global clubs (G7, World Economic Forum, EU, UN, NATO) has accepted that growing food poverty is an unavoidable part of good domestic housekeeping. After the UK toppled into the ditch of austerity during the 2008 financial crisis, hundreds of thousands of citizens started going without the basic necessities of life. Foodbanks went from being busy to manic, with demand outstripping supply in some areas. The profile of their customers also seemed to change. No longer were foodbanks just a place of last resort for benefit claimants but people with jobs started turning up.

Low wages and high costs of living have squeezed parts of the population who used to be able to get by. The weekly shopping bill is now seen as a luxury item; a source of anxiety for households all over the fifth largest economy in the world. Breakfast clubs before school, after-school tea and toast clubs, often run by churches – this is now the gaunt face of modern Britain.

And there are many initiatives responding to this harsh new British reality. One of them is a project called Your Local Pantry, developed by Church Action on Poverty in association with Stockport Homes. This is a food club, affording massive savings to members. Initial projects in Stockport were shown to have brought social, financial and health benefits including reducing isolation, averting food poverty and improving local people’s mental health. An impact report last year found Pantry members had saved £650 a year on average on their shopping bills, and that every £1 invested in Pantries generated £6 in social value.

At the heart of communities
Pantries are membership-based food clubs that enable people to access food at a small fraction of its usual supermarket price, improving household food security and freeing up more money for other essential household costs such as rent and utilities. For a modest weekly fee, members can access up to £30 of fresh produce. And the Pantries provide more than good quality food. They are situated in community centres where there is advice, help and of course, community. Food takes its place not simply as a commodity but as part of life. Customers are encouraged to try recipes and ingredients they might never have considered before. 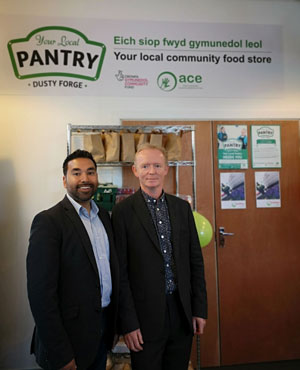 Pantries are sustainable, long-term, community-led solutions that can loosen the grip of food poverty in a particular neighbourhood. They can be part of a progressive journey to help people move beyond foodbank use, or can help reduce a family’s need for a foodbank. They provide members with more choice over the food they get than is possible at foodbanks, and are controlled by the members, strengthening the community’s ability to prevent food poverty or to progress out of food crisis.

There are ten Pantries across the UK with the most recent just opened on the large Ely estate in Cardiff. This sprawling post-war development is a mix of private and social housing and the new pantry is situated in the Dusty Forge centre. Even though it is based in a well-established community hub, the Pantry has been professionally shop fitted. It’s like entering a mini-market, complete with freezers, chiller cabinets and shelves. Yes, there are plenty of tins, and dried food but there is also an abundance of fresh meat and fish. This isn’t charity. This is food empowerment in action.

The Dusty Forge Pantry is a partnership between Church Action on Poverty and Action in Caerau and Ely (ACE). It is run and used by local people and it is hoped that it will have 150 members by the end of 2019.

Speaking at the launch of the new Pantry, Sam Froud-Powell, Community Support Coordinator at ACE said:

‘We are really excited to be launching Your Local Pantry at the Dusty Forge community centre. The Pantry provides members with good quality food, including fresh produce, for an affordable membership fee. This helps local families struggling with food costs to eat more healthily and expand the range of food in their weekly shop.’

All of which begs a question. Where does this amazing food come from? It comes from another innovative charity called FareShare, which redistributes surplus food to charities from the food industry. According to FareShare, they managed to give 20, 838 tonnes of good to eat surplus food to good causes like Your Local Pantry. Food that would otherwise have been thrown away.

And FareShare is under no illusions about the extent of food poverty in the UK. According to their website, 8.4 million people in the UK are struggling to afford to eat. This is equivalent to the whole population of London. But it’s worse than this. Within that eyewatering figure are 4.7 million people who live in severely food insecure homes. This means that their food intake is greatly reduced and children regularly experience physical sensations of hunger. The charity also quotes UN figures that show that 5.6% of people aged 15 or over struggle to get enough food. A further 4.5% report that they have gone a full day without anything to eat. They claim that their own research shows that 46% of people accessing the services of their charity partners (like Your Local Pantry) have gone a whole day without a proper meal in the last month.

Dignity and choice
At the launch of Dusty Forge Pantry, Niall Cooper, Director of Church Action on Poverty, said:

Pantries are a great way for local people to come together, strengthen their community and loosen the grip of high prices. Rising living costs and stagnating incomes have made life increasingly difficult for many people, but Pantries provide immediate, visible support that can protect people from being swept into poverty.Our vision is to grow a network of local Pantries across the UK. Why is this so important? Because people are struggling to afford good food and for a modest weekly fee you can access really good food with dignity and choice. We know about the growth of foodbanks. This is much more dignified – you can choose to become a member, choose to volunteer. It’s your project and the local ownership of it is really important.’

As I sat and listened to the various presentations being given at the launch event, I couldn’t help thinking about the principle of gleaning. Found extensively in the Old Testament, this was a legal duty imposed on landowners so that they could not over-farm or exploit their resources for selfish gain. Since the whole of creation belonged to God and thus his gift to humanity, everyone deserved their fair share of its produce. At harvest time, the landowner only had one crack of the whip, so to speak. The gleanings, according to Mosaic law, were for the poor of the land. Far from being an act of theft, those on the margins were allowed to gather the remains for themselves. It still sounds like an enlightened piece of social legislation and one that would have far-reaching implications in austere Britain. Imagine a world where a percentage of all food produced had to be given away to those in need. It would probably eradicate global hunger overnight.

Three cheers for Your Local Pantry and FareShare. There’s enough food to go around but is there enough goodwill on the part of government and the food industry to make it happen?

YOUR LOCAL PANTRIES
‘Your Local Pantries’ are membership schemes where, for around £3.50 each week, members can visit their Pantry and select at least 10 items of their own choosing from a wide selection of goods. Unlike foodbanks, Pantries include a good choice of fresh foods. Food costs much less than in a high street shop, with members saving up to £650 a year.
An impact report in 2018 found that every £1 spent in Pantries generates £6 of social value.The first Pantries opened in Stockport in 2014, and there are now Pantries in Greater Manchester, South Wales, London, the Midlands, north east Scotland and Lancashire. Membership is typically open to people in a particular geographic area or neighbourhood.
If you are interested in setting up a Pantry, visit: www.yourlocalpantry.co.uk
or email info@yourlocalpantry.co.uk
0
Shares