Featured
Home›Featured›Silence is not an option

Silence is not an option

Global persecution is on the increase

‘All that is necessary for the triumph of evil is that good men do nothing.’
– Edmund Burke 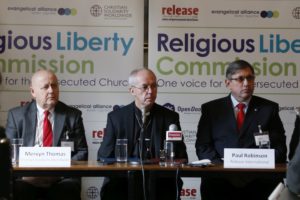 The global persecution of Christians is rising sharply. Right now, as you’re reading this article, Christians are being imprisoned, tortured or murdered just because of their faith.

In a recently-published report by international Christian charity, Open Doors, it highlighted the devastating picture of what is happening to the Church around the world. An alarming situation which is described by its CEO, Lisa Pearce as: ‘the worst ever since this detailed research began’. She goes on to say: ‘The rate of increase in persecution of Christians in the last year is shocking, and what happens in the Middle East and sub-Saharan Africa in the next 3-5 years will define the future shape of the Church.’

Echoing these findings, Mervyn Thomas, CEO of Christian Solidarity Worldwide, the charity working for religious freedom through advocacy added that: ‘In the very birthplace of Christianity, the Middle East, the Christian faith is in danger of extinction’.

And a third charity that identifies with and supports Christians who are persecuted for their faith is Release International. As I write, they have just reported that five Christians have been killed and a further six injured, one critically, in a series of assaults by Islamist extremists in Kenya. Such reports have tragically become almost a daily occurrence for those living under the threat of being persecuted for their Christian belief.

Surely something more needs to be done to highlight the plight and support those marginalized and persecuted for their faith? But who has that responsibility?

‘…every human being has value, because we are valued by God. Rights spring from the ineradicable dignity that they are given in creation, and we have a responsibility before God, as those who trust him, to protect them. …we must speak out in solidarity. Silence is not an option.’ said the Most Rev and Rt Hon Justin Welby, the Archbishop of Canterbury, as he delivered his keynote speech at the launch of the newly-formed Religious Liberty Commission (RLC) in Westminster in February.

I’d been invited to attend the RLC launch, and had come along to learn more about this new initiative. Who was involved, what were their aims, and how could I, as editor of The Plain Truth, be involved and supportive? The launch was perhaps appropriately held in the underground Chapel of St Mary Undercroft within Westminster Palace. An underground church completed in 1297 – and one of the few buildings that survived the great fire of 1834, which destroyed both Houses of Parliament.

Speaking with one voice

The Religious Liberty Commission has been launched by the coming together of four Christian organisations with one purpose: to press for an end to religious cleansing. The uniting of Open Doors; Release International; Christian Solidarity Worldwide and the Evangelical Alliance to form the RLC was welcomed by the Archbishop of Canterbury, who was making the inaugural speech for this new initiative.

As part of a tightly-packed congregation, I sat amongst other Christians from across the world, some from countries vehemently hostile to their beliefs. They came from the Middle East and others from the Levant – and one man, the Rev Dr Berhane Asmelash, from Eritrea where he had been a victim of persecution.

Following Justin Welby’s keynote address, Dr Asmelash took his place behind the lectern and gave the audience a first-hand and chilling experience of what Christians are facing in a country living under one of the world’s most repressive regimes.

‘Today in Eritrea, Christians are being persecuted. Many are imprisoned and regularly subjected to starvation, heavy labour and solitary confinement. Prison could be an underground pit or a metal shipping container. Torture is frequent. People are tied by both hands and legs and hanged on trees for hours or even days. One form of hanging is known as the “Jesus Christ”, which looks like a crucifix.

‘I was arrested and tortured with what is called the ‘Number 8’. Your captors tie your arms together tightly and put a log under your knees. Many years later, I still feel a numbness on the back of my hand.

‘We strongly call for the international community to put pressure on Eritrea for the immediate release of all prisoners of conscience.’

Following the official launch of the RLC, I was privileged and humbled to talk with Dr Asmelash. He explained that it was not just for Christian ‘actions’ – but merely for identifying individuals with a Christian faith that many are being persecuted and imprisoned. Christians are unable to work or are made redundant. Many are not allowed to travel and often can’t leave the country.

Our worlds were so different, yet here in Westminster we were united for this moment in time through our Christian faith and the desire for an end to the persecution of those suffering for their faith. We shook hands, parted and I quietly prayed for Dr Asmelash and others left behind to suffer in Eritrea. And as I walked away, I was determined to do all I could to highlight the plight of our brothers and sisters across the globe suffering horrendously just because of their faith.

The situation is spiralling out of control as the world becomes an increasingly more dangerous place for Christians as well as other minority religions to peacefully live out their faith. And the voice of persecuted Christians often appears unheard or ignored – an observation voiced by the Pope last month following the massacre by suicide bombers of 17 people worshipping in a Catholic church in Pakistan. ‘Along with imploring God, “the source of all good,” for the gift of peace and an end to this tragic situation of violence’, Pope Francis also accused the world of “trying to hide” anti-Christian persecution.’

A plan of action

But enough is enough. And with the might of these four Christian member organisations working together, the aim is to reverse this creeping climate of fear amongst the Christian community worldwide. In the coming months the RLC will be looking for support and involvement in three of the main, influential sectors of our society. Government; the media; and the Church. Speaking of the Church, Evangelical Alliance’s General Director, Steve Clifford commented: ‘Remote, persecuted Christians are often forgotten – unintentionally side-lined in the busyness of Church. We need to provoke all Christians to remember those being persecuted and take action.’

And for Plain Truth readers – what action could we take to support what the RLC are aiming to achieve? The three Christian agencies Open Doors; Christian Solidarity Worldwide; and Release International all have numerous ways in which you could help. Here are a few:

To find out more or to get involved, visit their websites:
www.opendoorsuk.org
www.csw.org.uk
www.releaseinternational.org
The Evangelical Alliance website also has details: www.eauk.org/rlc