‘The NHS will last as long as there are folk left with the faith to fight for it.’ – Aneurin Bevan

There aren’t many British institutions that evoke a sense of wellbeing, even love. The BBC is sometimes known as ‘Aunty’ but how should we refer to the National Health Service (NHS)? Mum, dad, grandma? For many people reading this article, the NHS was present at our birth, cares for us throughout our lives and will witness our death in some way or another. Nigel Lawson, a former Conservative Chancellor of the Exchequer once famously remarked that the NHS is ‘the closest thing the English have to a religion’. 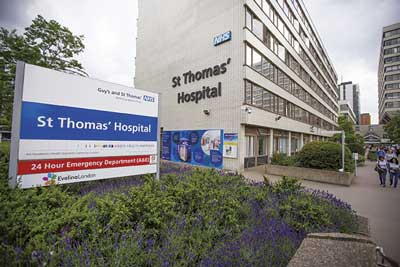 And this year the NHS is 70 years old. A stately age, commanding respect and even love. Earlier in the summer, a special service of thanksgiving was held at Westminster Abbey to celebrate the NHS. Religion was indeed lauding this venerable institution.

The Chief Executive of NHS England, Simon Stevens, quoted from the Archbishop of Canterbury’s book Reimagining Britain: Foundations for hope where he says that the NHS was ‘the most powerful and visible expression of our Christian heritage’ because it ‘sprang out of a concern that the poor should be able to be treated as well as the rich’.

Later, in his sermon, the Dean of Westminster Abbey, the Very Revd John Hall, quoted Aneurin Bevan, the main architect of the NHS. In a speech in 1959, Bevan said: ‘I’m proud about the National Health Service. It’s a piece of real socialism; it’s a piece of real Christianity, too.’ 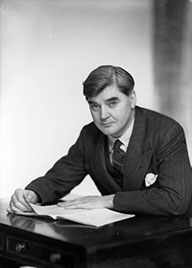 But what was Christianity’s contribution to the founding of the NHS? Its greatest champion was Aneurin Bevan (1897 – 1960), MP for Ebbw Vale and Minister for Health 1945-1951. Bevan’s religious affiliation was ambivalent. His parents were practising Christians; Bevan’s father David was a Baptist whilst mother Phoebe was a Methodist.

Aneurin joined the Independent Labour Party in his late adolescence and this marked a different kind of conversion.

He was convinced by the teaching and practice of socialism and declared himself to be an atheist.

Despite his earlier antipathy to organised Christianity, it seems highly significant that more than ten years after launching the NHS, Bevan refers to it as a ‘piece of real Christianity….’ What did he mean by this? Maybe he was referring to the organisation’s three core principles, that this service should:

In Bevan’s opinion, ill health was everyone’s concern and the bill should be met by society and not those who could afford to pay: ‘Illness is neither an indulgence for which people have to pay, nor an offence for which they should be penalised, but a misfortune, the cost of which should be shared by the community.’

This emphasis on a universal service, free at the point of need, has a deep resonance within the Judaeo-Christian tradition. In the Old Testament, we read of Naaman, a senior military officer in the Syrian army who has leprosy1. He reluctantly follows Elisha’s instructions (Elisha was a prophet in Israel) and bathes seven times in the Jordan River.

He is miraculously cured and offered payment to Elisha who declined his gift. Elisha’s servant, Gehazi, later decides to extract payment, against the wishes of his master, who then punishes him severely.

This ancient story reveals a great deal about health care. Good health falls within God’s general mercy and love and is available to anyone irrespective of their religious affiliation. And it should be free at the point of delivery.

Or take the New Testament story of Peter and John on their way into the temple.2 A lame beggar asks for money but Peter replies that they have no money but instead commands healing in the name of Jesus Christ of Nazareth. The man is immediately healed and starts praising God. This story packs the same punch as the one about Naaman. Healing is for everyone; it’s a sign of God’s love and money doesn’t come into it.

All fine and dandy, except the NHS had many critics in 1948; in fact it was born in controversy. The Labour Government of 1945 committed itself to major social reforms and its 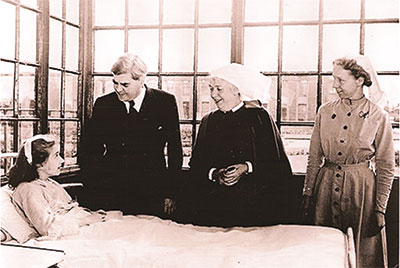 Bevan seeing patient on a ward

charismatic health minister, Aneurin Bevan believed in a national health service free at the point of need. Through general taxation, a service would be created to care for all citizens from the cradle to the grave.

Bevan’s most bitter adversary to the NHS’ creation was the medical profession, in the form of the British Medical Association. Charles Hill, the BMA’s Secretary likened the proposed NHS to Nazi Germany: ‘I have examined the Bill and it looks to me uncommonly like the first step, and a big one, to national socialism as practised in Germany. The medical service there was early put under the dictatorship of a “medical fuhrer.” The Bill will establish the Minister for Health in that capacity.’3 Eventually, the BMA offered their support to the creation of the NHS. Bevan attributed this about turn to his agreement that senior consultants could continue to treat private patients whilst contracted to the NHS. By ‘stuffing their mouths with gold’ (Bevan’s words), he had removed one of the major objections to their support.

He was less successful with the Tories. During the health bill’s passage through the House of Common, the Conservative Party voted against it 21 times before the Act was passed in 1946. And Bevan never forgot their opposition.

On the eve of the first NHS hospital in 1948, Prime Minister Clement Attlee suggested that all parties should recognise the NHS as a national institution. Bevan was less conciliatory: ‘So far as I am concerned they (the Conservative Party) are lower than vermin…They condemned millions of people to semi-starvation.’

He went on to say: ‘The Conservatives voted against the National Health Act, not only on the second but on the Third Reading. I do not see why we should forget this.’ But today’s NHS is under great strain. Escalating pharmaceutical costs, an ageing population, expensive pension plans are all placing great strain on the NHS.

It probably needs a massive injection of cash, raised through general taxation. But no political party would put their name to such a proposal for fear of losing the next election. 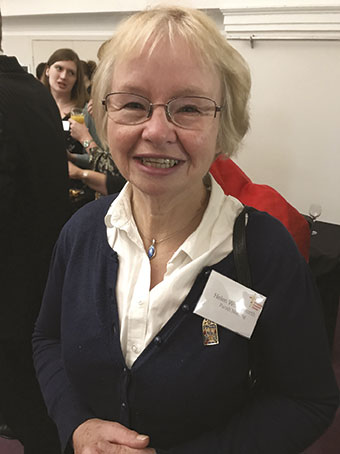 A recent healthcare initiative in the UK, sees churches reaching into their communities through so-called ‘parish nurses’. Parish Nursing Ministries UK (PNMUK)4 was set up by Dr Helen Wordsworth, a Baptist Minister. Inspired by the work of parish nurses in the USA, this organisation seeks to integrate basic nursing into a church’s pastoral care.

Through employing qualified nurses, an increasing number of churches are making contact with people who would otherwise not attend church but are happy to come to clinics and talk about their health and associated anxieties.

In this environment, prayer is offered and readily accepted. Follow up is referred back to the NHS system but the church as a therapeutic community of friends is making its mark.

Health is an important issue in the Bible and the Church has a long tradition in medicine, nursing and seeking the common good of everyone, of all faiths and none. Thank God for the NHS.