The Book of Kells

A silent labour of love for the Gospels 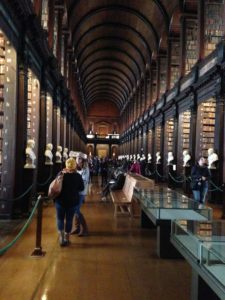 Every year, over half a million visitors from all over the world make their journeys to Dublin’s Trinity College to see the display of a very special book written around 800 AD.

Housed in the college’s Old Library, locked securely in a display cabinet and under the watchful eye of a security guard, the Book of Kells is a precious and lavishly decorated manuscript of the four Gospels in Latin and based on a Vulgate text.

Although I was aware of the Book of Kells, I knew little of its origin – where and when it was written and by whom. But when I visited the ‘Turning Darkness into Light’ exhibition recently, its fascinating story started to unfold and the book came alive. I was struck by not only the importance of the manuscript, but the dedication of the unknown scribes who lovingly constructed this beautifully illuminated work which took around 30 years to complete.

The story begins with Columba
Around 563 AD, St Columba (also known by his Irish name of St Colm Cille) an Irish abbot and missionary, sailed from Ireland – where he had already founded many monasteries – to the wind-swept island of Iona lying off the west coast of Scotland. Iona was a place of education as well as being a starting point for missionary journeys. The Christian faith spread from Iona in many different directions. And it was on this small island amongst the Inner Hebrides, just three miles long and one and a half miles wide, Columba founded his monastery where the Book of Kells is believed to have been written in the scriptorium. The question of the exact location of the book’s production is debated; the first theory, that it was begun at Iona and continued at Kells, is widely accepted. However, it is certain that the Book of Kells was produced by Columban monks closely associated with the community at Iona.

St Columba had a warm personality, and accounts of his life also tell that he had a passion for copying the scriptures – as well as having a great love of animals. So it’s not surprising that this love of animals is echoed in the very many illuminated texts in the Book of Kells. It is thought that the completion of the Book of Kells may have been planned as a very special – and luxurious – copy of the four Gospels to celebrate the bi-centennial of the death of St Columbus in AD 579, where for 34 years, Columba had served God and church on the island of Iona.

A painfully slow process
Because the printing press had not yet been invented, (this would come much later at around 1450) each time a copy of a book or manuscript was required, ‘scribes’ had to painstakingly copy each letter of every word. And those monks working in the scriptoriums of the monasteries – the scribes – would work in silence. The work was hard, and a great amount of concentration was required as accuracy was vital, especially when copying the Gospels for the Book of Kells. Producing this book was a labour of love that would take three decades to complete, but would last for many hundreds of years and be seen by millions.

So like all the other important books and manuscripts of its time, the Book of Kells was written on vellum (calf or goat skin) parchment. The work required to ‘make ready’ the vellum was in itself quite a long-winded process of cleaning, scraping, dipping in lime, stretching and flattening the animal skins ready for use. This would typically take several weeks. But using vellum would guarantee over a thousand years of life for the book or document, and indeed archive Acts of Parliament[i] in the UK today are still recorded on vellum.

With the parchment prepared, the writing tools of quills and ink had also to be sourced by the monks. Often monasteries kept livestock and monks tended geese and swans, and discarded feathers could be shaped into flat-edged quills ready for writing.

A huge variety of coloured inks were used in producing the Book of Kells. All of the ink was made by the monks out of juices of plants, roots, leaves and other materials and minerals they were able to source. But the formula for the colours remains a mystery. Even today, despite being analysed by chemists, it is not always clear how the colour pigments were prepared.

A template of scored lines and pin-pricks for margins on the prepared vellum was used to ensure the writing was kept neat and tidy. Then, over the next 30 years, the scriptorium at St Columba’s Monastery[ii] would be the silent home for the creating of this beautiful and important copy of the four Gospels.

Illustrating a message
As well as the words, pictures were key to understanding the Christian message – even for those unable to read. When the text was read to them, for example the parable of the sower, a cock and hen appear between the lines. These would make the people think of fowl picking up seeds that fell by the wayside.

In another place, the capital ‘N’, standing for ‘no man’ (nemo in Latin) is formed from two small men facing each other, with their bodies twisted and positioned to make the outline of the ‘N’. The two characters look quite unfriendly, and are pulling at each other’s beards. This ‘N’ illustration starts the sentence of Matthew 6:24: ‘No man can serve two masters. He will either hate the one and love the other, or hold to one and despise the other.’ These little men struggling would perhaps give insight to the practical meaning of the verse.
Shortly after the completion of the Book of Kells, Iona was attacked by Vikings leaving 68 monks dead. The surviving monks fled back to Ireland and established the monastery of Kells at County Meath where the Book was kept as a treasured reminder of Saint Columba. Then in 1006 AD, the Book was stolen by night from the western sacristy of the church of Ceanannus in County Meath. Although fortunately recovered a couple of months later, its jewel-encrusted golden cover had been ripped off and was never recovered. Since that time, the Book of Kells has been widely regarded as Ireland’s finest national treasure and was protected and kept in the parish church. Then in 1653 it was taken to Dublin for reasons of security during the Cromwellian period, later being sent by the Bishop of Meath in 1661 to Trinity College.

Originally kept in the Long Room Library of Trinity College, the Book of Kells was moved downstairs a few years ago where it takes centre-stage of the exhibition ‘Turning Darkness into Light’[iii]. An inspiring display that includes videos on the processes used to create the Book of Kells, information boards and leaflets as well as pages from the manuscript. Two volumes are on public view, one opened to display a major decorated page, and one to show two pages of script. The volumes are changed at regular intervals.

So despite attack, theft and damage the journey and rich history of this labour of love for the Gospels, telling of the life of Christ, is still as precious today as when it was created, in silence, some 1,200 years ago.

Into the 21st century
The Book of Kells can now be viewed on an iPad app. Developed by Trinity College, the app now allows the user to view its images in high resolution in all their richness. It is also the first manuscript in its complete form available as an iPad app.
The app contains all 680 pages of the manuscript, permitting the user to scroll through the manuscript page by page. High resolution images of the most highly decorated pages are included at up to six times their original size.

acts about the Book

St Colm Cille (St Columba) of Iona
St. Colm Cille was born into the O’Neill clan in Donegal and given the name Crimthann. He was born into a royal family where three of his cousins became monarchs of Ireland. He was an Irish Abbot and founder of the Monastery of Iona and a missionary who helped bring Christianity to Scotland. He took on the name Colm Cille, which means ‘Dove of the Church’, as his monastic name and is often referred to as ‘Columba’ which is Latin for dove.

Vellum still important today?
Parchment and vellum have traditionally been used to record important documents and laws and were the earliest writing materials used to record such documents as the Dead Sea Scrolls in 435 BC and the Magna Carta in 1215 AD.

In the UK, William Cowley, a Buckinghamshire-based firm still makes vellum by hand and supplies it for use as archive copies of UK Acts of Parliament. But this could all change as a handful of MPs and Lords decided to switch to using paper in order to make a cost-saving.

However, the 1,000-year-old practice of recording laws on goat and calf skin may be saved, after the House of Lords said it would consider an offer from the Cabinet Office to pay the costs of carrying on the tradition earlier this year. A Backbench Business debate on the continued use of vellum was scheduled for 10 March 2016 but did not take place.

STOP PRESS: ‘It is with great pleasure that I report, following a lengthy debate in the House of Commons, MP’s have voted overwhelmingly to continue to record Acts on vellum. This decision has secured the availability of “original documents” for those generations that follow.’ (Paul Wright of William Cowley www.williamcowley.co.uk/news/printing-acts-of-parliament-vellum-wins-the-day/)

[i] The Book of Kells was produced wholly or partially on Iona, with some parts possibly written at Kells, County Meath where the book was moved after 806 AD.

[ii] More information on the exhibition can be seen at www.tcd.ie/visitors/book-of-kells